The French daily, Le Figaro, started a series of articles aimed at criminalizing the Parti des Indigènes de la République (PIR) and its leader Houria Bouteldja. The PIR is a member of the Decolonial International Network. They are portrayed as racist, homophobic and anti-semitic.

On Sunday June 18th 2017 the Quds Committee in the UK organized the annual Al Quds Day. Al Quds Day is an international event to protest the Zionist occupation of Palestine and is held on the last Friday of Ramadan. For years this event has been organized in Britain and every year it attracts the criticism of Zionist forces. This year a particular vicious campaign was waged against the organizing committee by the Zionist Campaign Against Anti-Semitism.

They pressured the mayor of London Sadiq Khan to ban the event. His office bowed to the pressure and supported the call. The Zionists thanked him: “Both the Mayor and the Deputy Mayor for Policing and Crime have been very helpful in facilitating contact with the right people within the Metropolitan Police Service, and we are grateful to them for their efforts.”

But the London Police stood by the freedom of expression and allowed the event to continue.

Meanwhile Islamophobic pundits created a climate of hate around the event. Majid Nawaaz, the director of the Quilliam Foundation and LBC radio presenter, along with some niche media attacked the organizers, claiming they were terrorist sympathisers, and even focused on the Islamic Human Right Commission (IHRC), a member of the Decolonial International Network. IHRC has ledged several complaints with the BBC, LBC, and various press and media regulators, as well as the police, after this year’s campaign against Al-Quds Day.

The night of 18th June after the event, a white terrorist Darren Osborn, drove his van into a crowd of Muslims at a mosque in North London killing one and injuring eight people. It has been reported that his original plan was to attack the crowd at the Al Quds Day march.

The attack on the Al Quds Day failed, but it showed the concerted effort of Zionists, Islamophobic and terrorist forces to clamp down on the freedom of speech.

A political party of people of color

Recently a unique development took place recently in The Netherlands.

In 2014 two Turkish members of the Dutch Labour Party in parliament, Tunahan Kuzu and Selçuk Öztürk, left the party because of its attitude towards racism and islamophobia. They started their own faction in parliament and eventually named their group DENK (THINK). Between 2014 and March 2017 they vigorously campaigned inside and outside on a platform against racism and islamophobia. The developed a program with radical demands, among others:

The daring confrontation in parliament with the white parties and the smart use of social media to expose racism in parliament earned DENK a reputation of courageous fighters in the struggle against racism and islamophobia.

The campaign against DENK

The media, political establishment and the white left in Holland immediately reacted with outrage to DENK. The critique was not just about political positions. It was the whole idea that people of color would dare to be non-apologetic and confront racism directly in parliament was unacceptable. So a campaign of vilification was started. Kuzu and Öztürk are Muslim fundamentalism. They are the fifth column of Turkish president Erdogan in Holland. They are a divisive force that is dividing people rather than uniting them. They should denounce the Armenian genocide. They should speak out against Erdogan’s policy to arrest people involved in the military coup against Erdogan. They are anti LGTB and anti women, despite the fact that their program calls for banishing homophobia, closing the wage gap between men and women and a vigorous policy against sexual intimidation.

So the whole operation was directed at shifting the focus from racism and islamophobia to other issues.

Personal attacks, lies, framing them as irrational and attacking the whole idea of a political party for people of color had the opposite effect in the different communities of color. DENK was admired for their non-apologetic approach of racism and islamophobia. They attracted followers outside the Turkish community. They broadened their base to the Muslim community as a whole.

In May 2016 a well know black former TV presenter, Sylvana Simons, became a member of DENK. Although DENK already had black members, her entry into national politics via DENK created a big stir. It was symbolic for the unity of all people of colour, especially the Black-Muslim alliance. She became a target of a smear campaign. She received countless death threats. Immediately forces came into action to divide DENK. Simons was portrait as a radical, anti-white person, that had nothing to gain by allying herself with Muslim men, who are also patriarchal.

These forces were eventually succesfull. In December 2016 Simons left the party without prior notice or discussion. A few weeks earlier her supporters had secretly founded a new party, Article 1. This refers to the first article of the Dutch constitution that prohibits all discrimination. She announced that her parte was founded on the theory of intersectionality that does not divide people, but unites them. She used the argument of divisiveness against DENK to justify her split.

On March 15 the elections took place for the 150 seats of parliament. To the shock and surprise of the white community and the white political establishment DENK gained three seats. The Labor party went down from 38 to 9 seats. The extreme right won seven seats (the party of Geert Wilders won five and another extreme right party won two).

Article 1 did not gain a seat. She got half of the votes needed for a seat. Simons mainly got her votes from the black community. The hope that white women and white LGTB would support her did not materialize.

The victory of DENK energized many people of color who actively participated in the campaign and in the discussion on social media. A united front of Blacks and Muslims would have strengthened the struggle against racism and islamophobia. The split was more detrimental to the black community. If Simons had stayed in DENK she would now have been elected to parliament, because she would be number three on the slate of DENK.

The first lesson is that in countries with large communities of color a political party that explicitly draws upon their support can have a major impact on the debate on racism and islamophobia, provided that they take a radical approach. Even if they get one seat, their voice in parliament has a major impact on the self-confidence of the communities of color and strengthens the struggle against racism and islamophobia.

The second lesson is that the unity of Black and Muslims is considered the most dangerous strategy by white power. That unity is a powerful force in bringing down institutional racism. That is why all forces of the white power structure (media, violent threats, politicians) are focussing on breaking that alliance. Unfortunately it succeeded for now, but hopefully activists from communities of color have learned this lesson and will work together to recreate this unity.

The third lesson is that the weakness of the theory of intersectionality has led to a shift in focus away from racism and islamophobia and has damaged the movement.

Hopefully these lesson will be valid for social movements in other European countries.

In 2012 activists from Europe established a network called Decoloniality Europe. Many of the participants maintain relations with decolonial organizations and networks outside of Europe. In order to develop these relations it was necessary to create a space that extends beyond Europe. That is why the network changed its name to Decolonial International Network. 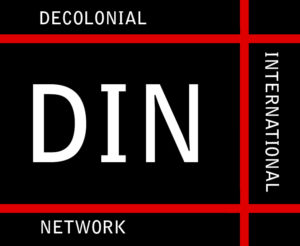 Organizations who want to join the network can contact the coordinator of DIN: Sandew Hira, sandew.hira@iisr.nl.

Sandew wil engage in a conversation about the relationship with DIN and explores ways to develop it.

In response to last week’s execution by the Bahraini government of three of its own citizens IHRC staged a double protest at the Houses of Parliament and the Bahraini Embassy in London.

Huge images bearing messages condemning the executions and the British government’s continued support for the authoritarian island monarchy were beamed onto both buildings last Friday night (19 January) in order to raise political and public awareness.

The giant messages (see attached photos) were set against the backdrop of the Bahraini flag and the faces of the three executed men, Abbas al-Samea, 27, Ali al-Singace, 21, and Sami Mushaima 42. All had been found guilty of planting a bomb which killed three policemen but their convictions were widely seen as politically motivated, based on retracted confessions and mired in allegations of serious torture.

Britain continues to politically and militarily support the Bahraini regime despite a well-documented history of human rights abuses against its citizens and reform campaigners.

A report commissioned by the Bahraini government (the BICI report) documenting the events of an uprising in 2011 revealed systematic torture, arbitrary detentions, and extra judicial killing in the streets. Although the Bahraini government accepted the report and promised to implement its recommendations, their implementation has been woefully inadequate. Professor Cherif Bassiouni, the head of the BICI team, wrote in June last year that most of the reforms had not been fully implemented.

Things actually seem to be getting worse. The country’s only remotely critical newspaper, Al Wasat, which was shut down in 2011, has now been ordered by the government to close its online edition too after criticising the executions.

Earlier this year Bahrain announced that it was reversing one of the BICI reforms which stipulated that the National Security Agency (NSA) have its powers of arrest removed. The power separation was considered important in controlling torture.

Despite these developments, last December PM Theresa May flew to Bahrain to meet with leaders of the Gulf Cooperation Council on the sidelines of the organisation’s latest summit. The visit demonstrated a glaring disregard for human rights and also a dangerous message of approval to the al-Khalifa dictatorship.

A month earlier Britain opened its first military base in the Gulf in Bahrain, the first in the region since 1971. The base will be used by special forces and Navy destroyers, frigates and minehunters to help prop up the region’s autocrats. Britain also supplies Bahrain with military equipment and training which have been used to suppress indigenous uprisings and pro-reform protests.

Likewise the British government remains an unflinching backer of the Saudi Arabian government whose troops are stationed on the island in order to protect the regime against any threats to its rule.

IHRC chair Massoud Shadjareh said: “The extra-judicial murder of the three Bahrainis has once again highlighted the brutal nature of the al-Khalifa regime. It is high time that the British government stopped becoming an accomplice to the suppression and abuse of fundamental human rights. The British government’s contention that economic interests in the region are important should not be used as an excuse for us to acquiesce in the continuing torture and oppression of the Bahraini people.”