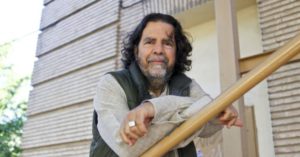 In his frequent travels to different countries in Europe to lecture on decolonial knowledge Ramon Grosfoguel, professor at the University of California Berkeley, noticed that organizations and individuals in different European countries are working on the same themes along the same lines without knowing of each other’s existence. He decided to create a space where academics and activists could get to know each other by organizing a first conference under the name “Decoloniality Europe” in 2012 in Madrid.

Out of this meeting a regular contact followed between Center of Study and Investigation for Global Dialogues in Barcelona (Spain), Islamic Human Rights Commission (IHRC) (United Kingdom), Institute for Scientific Research (Holland) and the Parti des Indigènes de la République (PIR) (France) and non-regular contacts with other networks and individuals.

The second meeting in 2013 in Barcelona moved from the initial stage of knowing each other to the necessity of setting up a regular communication through a newsletter and website. This goal was not achieved mainly because the organization of the network was still unclear. Is it a network of individuals or a network of organizations?

The third meeting in 2014 in Amsterdam established the network as a network of organizations with some common projects (Genocide Memorial Day, Islamophobia Conference). Academics and individuals were encouraged to join or set up organizations. Meanwhile cooperation between individual organization had taken shape by sharing information, experiences in the social struggle and education (courses, lectures).

The fourth meeting in 2015 in Paris intensified the cooperation and made a distinction between knowledge producing institutes like Global Dialogues and Institute for Scientific Research, activists organization like the Parti des Indigènes de la République in France and human rights advocacy organization like Islamic Human Right Commission in the UK. Global Dialogues organizes Summer Schools in Granada, Barcelona and Mexico and Institute for Scientific Research (IISR) organized a Summer School in Amsterdam. At the end of 2015 the Summer Schools in Amsterdam and Barcelona fused into one Summer School that is going to be held in Barcelona.

The fifth meeting in 2016 in London took up the challenge to articulate a more firm theoretical basis of the network for the work that is being done. It became clear that we are not building a movement, but a space for decolonial movements to develop. There is no centrally led organization but a network where each participant determines what they want to contribute to creating and maintaining the space.

In 2016 the network changed its name from Decoloniality Europe to Decolonial International Network. In the internet era social movements in Europe develop relations with organizations outside of Europe.

A decolonial concept of organization

For a long time the Leninist concept of the vanguard party was a model for the organization of the left. Ramon Grofoguel explains: “The vanguard party sets out from a canned, a priori program which, through being characterized as ‘scientific’, is self-defined as ‘true’. From this premise follows a missionary politics of preaching in order to convince and recruit the masses to the truth of the vanguard party program.”

The Zapatista movement in Chiapas Mexico developed a different concept. Grosfoguel: “Very different from this is the post-messianic politics of the Zapatistas, which sets out instead from “asking questions and listening” and in which the “rearguard” movement becomes a vehicle for a critical, transmodern dialogue which is epistemically diversal, and as a result, decolonial.”

The implication for the network is that we start from the premise that there is not one way to decolonize society and everyone can make a contribution: institute that produces knowledge, human rights organization like IHRC, political movements like the PIR etc. So the network would not promote just one model of organization but acknowledges the diversity of decolonial organizations.

The network operates on the principle of not preaching to others what they should do but by asking questions and listening while walking. We don’t have a articulated program on the basis of which we organize people, but facilitate others in developing programs by sharing experiences in the struggle and developing bonds between organization. Participating organizations are bringing something to the space that we create and take out of it what is useful for them. Practice has taught us that this way of organizing strengthens ties between movements because it is solely based on what speaks to the mind and hearts of the participants who are all motivated by some analysis of decolonizing knowledge, power and the mind.

Membership is organized on the basis of cooptation. An organization that wants to become a member contacts one of the existing members of the network or the coordinator. The network has a coordinator – Sandew Hira: sandew.hira@iisr.nl– who is available for conversation, feedback and advice.

On the basis of a conversation the member or coordinator can decide to recommend the new organization to become part of the network. We still have a long way to go and learn what the best way is to organize ourselves. But sometimes just starting with the work and using our intelligence and gut feeling is good enough to build up the appropriate mechanisms for developing the network.

No leadership, only participants and facilitators

The network has no mechanism for an elected leadership. Four organizations have taken upon themselves to facilitate the network by making available resources for the annual meeting and the communication between the members. There are no membership fees. Each organization builds its own infrastructure and decide what they want to contribute to building the network, what they want to share with other members and what kind of projects the want to develop with other members. We don’t build a centrally led movement, but a space for movements to flourish. We don’t ask member for something, nor do we give them something. The space enables them to benefit from infrastructure that is created and maintain by members: education, campaigns, projects etc.

The network is not an NGO, nor is it subsidized by governments. It is totally dependent on donations from sympathizers.

The bank account of the network is: International Institute for Scientific Research NL35 RABO 0103 0575 60