Decolonial International Netwerk and Vrede met Venezuela are organizing an event on the theme of economic boycott and genocide in the context of Genocide Memorial Day on January 19th. The question of the theme is: “Is an economic boycott that leads to thousands of death a form of genocide?”

Genocide is associated with violent actions that leads to death of large numbers of persons. What is large number of person die, not due to violence, but due to economic boycott?

In Venezuela the economic boycott of that country has led to 40.000 deaths. The Amerikaanse Center for Economic and Policy Research in Washington has calculated that due to the boycot the mortality rate has increased with 31% from 2017 to 2018. Due to the lack of medicine the chances are that in the coming years large numbers of people will die, especially among those with HIV (80.000), kidney dialysis (16.000), cancer (16.000) and diabetes (4 million).

The instrument of economic boycott is now used much more than in the pas to topple anti-imperialist governments. The event in Amsterdam will deal with the following questions:

The event will take place in Amsterdam in the context of Genocide Memorial Day (GMD). This day is a day to remember “man’s inhumanity to man”. GMD was started in 2010 by the Islamic Human Rights Commission, founding member of the Decolonial International Network, as an annual tradition to commemorate the Zionist attack on Gaza in 2008. Some 1,400 Palestinians, mainly citizens, were killed without any intervention by governments. GMD aims to create awareness about the factors leading up to genocide and what we can do to prevent them. 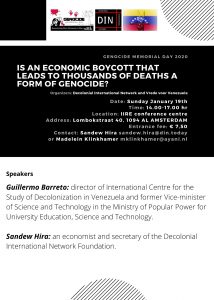 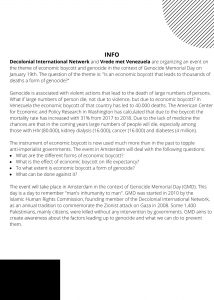