IHRC launched its second UK-wide study, ‘Environment of Hate: The New Normal for Muslims in the UK’. It is an indispensable work which draws on rigorous survey findings and academic studies to address the candid realities of Muslims in Britain based on thoughts and experiences, the normalisation of Islamophobic rhetoric and increasing anti-Muslim hate crime.
The study will be presented at a meeting in the European parliament on September 27 2016 in Brussels.
The study is relevant for the rest of Europe where the rise of the police state creates the normalization of an environment of hate.
Read more.

Fighting the rise of the police state in Britain

Abed Choudhury (IHRC): “The cumulative effects of British legislation against terrorism has been the creation of a police state and an environment of hate”

For the last 15 years the British government has been engaged in a legislative programme to combat terrorism but which also includes ideological and physical opposition to its overseas interventions. The cumulative effect of these multiple legislations has been the creation of a police state and an environment of hate, explains Abed Choudhury of the Islamic Human Rights Commission in Britain.

Stephen Small: “The fundamental assumptions underlying the politics of race and immigration in Europe – with regard to Black people in particular and other people of color in general – are wrong”

Stephen Small, Associate Professor of African American Studies at the University of California, Berkeley, is currently finished a research project on Black Europe. The results will be published in the book series Decolonizing The Mind, titled 20 Questions and Answers on Black Europe. He describes the content of the book which is due to appear in November 2016. 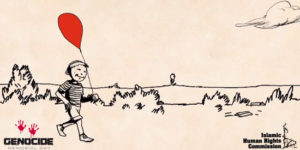 Genocide Memorial Day (GMD) was initiated by the Islamic Human Rights Commission in 2010. It coincided with the anniversary of the end of the Israeli invasion of Gaza under the name Operation Cast Lead. GMD is about remembering man’s inhumanity to man. GMD rejects the notion that there is a hierarchy of victims depending on their background. It seeks to hold people accountable by highlighting those people and power structures responsible for perpetrating genocidal acts and by remembering the victims.

In recent years member of DIN joined in organizing similar events under the name Genocide Memorial day on the same day: the third Sunday of January.

Each member decides on the way some form of genocide is remember in the world. There is coordination on promotion and on possible central themes.

See the coverage in London: http://www.ihrc.org.uk/multimedia/video/11635-genocide-memorial-day-2016-

The coordinator for GMD is IHRC: info@ihrc.org.

For some years DIN members are involved in organizing annual Islamophobia conferences in Europe, mainly in France, Belgium and the United Kingdom. In some cases they are academic conferences with an emphasis on how islamophobia is embedded in knowledge production. In other cases they are meetings of activists that combine theory with the practice of struggle against racism and islamophobia.

The conferences are all held in the last month of the year. Some speakers go from one conference to another.

If you want to know more about the involvement of DIN in the Islamophobia conference, contact the DIN coordinator: sandew.hira@iisr.nl.