On December 8, 2018, the Islamic Human Right Commission (IHRC), member of the Decolonial International Network (DIN), organized a successful conference in London with the theme Islamophobia and Silencing Criticism of Israel.

One of the speakers was Ramon Grosfoguel, founder of DIN. Ramon stated that Israel is an extremist state that practices and promotes terrorism against civilian populations while simultaneously has the audacity to accuse those who resist its crimes of being “terrorist”.

He outlined the double standards that are currently in place. For example, one can freely send and raise money for the IDF (with many celebrities recently attending and promoting a fundraiser with the exact aim) but those doing the same for Hamas or other forms of Palestinian resistance are immediately labelled as ‘terrorists’ or ‘terrorist supporters.’ People across the board are fearful of announcing their support for Palestine lest they too are painted with this unsavoury and undeserved brush.

He explained that there is an institutional framework in place to criminalise the supporters of Palestine. Israel micromanages every person, group and institution that criticises Israel. The Israeli lobby is automatically aware of every kind of criticism – even if it has no real impact. There is always a response to criticisms of Israel regardless of who they are from. In particular, those who are proponents of BDS will always find themselves under fire. Artists, musicians and actors who come out in support of Palestine are also labelled ‘anti-Semitic.’ Israel winning public support and opinion in the West is a major strategic operation.

On December 22, 2018, the right-wing news site The Telegraph in the UK published an article attacking IHRC and Ramon with the title: Group awarded more than £140,000 of EU finding described zionism as a ‘criminal enterprise’. It invokes Dave Rich, head of policy at the Community Security Trust, which claims to monitor anti-Semitism, and quotes him against Ramon and the IHRC: “This speech evokes classical antisemitic conspiracy theories, with its talk of global Zionist frameworks and lobbies controlling what people think, and it does so to encourage people to support terrorist groups that are banned in this country. It is yet another example of the IHRC’s extremism.”

The Telegraph calls for an end to the funding of the participation of IHRC in a European research project on Islamophobia. This kind of attack is an illustration of what Ramon in the conference called the “micromanagement” of every person, group and institution that criticises Israel. Now the “micromanagement” he spoke about is applied to his own speech.

It reminds us of the days of slavery on the plantations of the Americans where enslaved Africans were monitored in each and every movement in search of a sign of protest and resistance. That kind of micromanagement was effective in the short term on some plantations in some periods, but could not prevent the historical demise of the system of slavery. And so it goes for Zionism. Its micromanagement of resistance can cause inconvenience and problems in the short term, but one day justice will prevail and Zionism and the apartheid state of Israel will cease to exist.

This year London and Brussels are the venues where the annual Genocide Memorial Day is being organized, a day focused on remembering man’s inhumanity to man. It takes place on the third Sunday of January each year.

In London the theme is ‘Genocide as a tool for colonialism’.

In Brussels the Bruxelles Panthères are organizing a conference with the theme: ‘What Belgium owes to Congo’. Speakers are Sandew Hira, coordinator of DIN, Véronique Clette-Gakuba, researcher at ULB, Toma Muteba Luntumbue, art historian and Martin Vander Elst, researcher at the Laboratory of Prospective Anthropology (UCL). 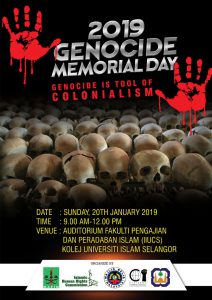