Islamic Human Rights Commission, a founding member of the Decolonial International Network, has carried out a guerilla projection as a protest against the genocide in Yemen. The guerilla projection is the projection of an billboard image on a building with a high public profile, such as the building of the parliament of the BBC building. Massoud Shadareg, chairman of IHRC, explains the concept of guerilla projection.

Shadareg: “We purchased a very powerful projection apparatus and had it upgraded so we can project from a long distance a billboard image on a building. It runs on a strong battery, because you need electricity in the open space. The building should not by covered in light already. We use the projection to call attention to human rights abuses, where the Western media is silent. We have a technical team that handles the projection. Then we have a team that engages in discussion with the police when they arrive. We need 30-45 minutes to set up the whole operation, do the projection and take images and videos to distribute them through social media. When the police arrives, our team tries to keep them as long as possible in a conversation so our technical team can move forward. It has an enormous propagandistic value.” 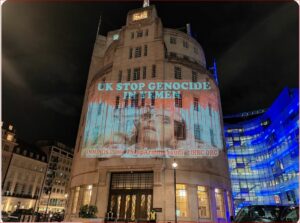 projection at the BBC building in London

There are many contributions to decolonial theory, but they focus on specific themes notably epistemology, history, social relation (race, class, sexuality, gender), relation between humans and nature, politics etc. In my view we need to develop decolonial theory into a comprehensive, coherent and integral theoretical framework. A comprehensive framework means that decolonial theory should cover the major topics of how to analyze and change the world society. These topics are economic theory, social theory, political theory and cultural theory. A coherent manner means that different theoretical parts of the comprehensive framework should not contract each other. They should be consistent and logical. An integral manner means that the different parts should be connected through some basic common concepts that link them together to form a distinctive theoretical framework.

Liberalism was the theoretical framework of the rising capitalist class in Europe against the feudal Christian social order. It claim universality, but in reality it had an epistemology that removed ethics from knowledge production in order to fight the influence of the Church. Liberalism was comprehensive. It had an economic theory of capitalism, a social theory of the individual as the cornerstone of society, a political theory of parliamentary democracy and a cultural theory of universal scientific and objective knowledge production. It had a view of world history that states that human society moves from backwardness to modernity with liberal capitalism as its eternal apex.

Socialism was the theoretical framework of the revolutionary working class in capitalist society. Its epistemology acknowledge was not different of Liberalism. It has the same universalist approach to knowledge production. Its economic theory was based on the labour theory of value that explains how capitalist exploitation works by extract value from unpaid labour of the worker. It social theory was a class analysis of social relations. It political theory was the theory of organizing a socialist revolution to overthrow the capitalist system. Its cultural theory was based on the concept of an base (technological and economic fundaments of a society) that influences or even determines the superstructure of social, political and cultural relations.

Outside the Western Enlightenment there are multiple comprehensive, coherent and integral theoretical frameworks. In Islam, Buddhism and Chinese philosophy these frameworks have been articulated for societies in which they were dominant. There may be such frameworks that has been developed in current times, but in languages that are inaccessible for me. Therefore I want to emphasize that what I present here is just one of the many possible (decolonial) frameworks.

The core of the framework I present here is based on the concept of mental slavery and Decolonizing The MIND (DTM). It is a specific approach to decolonial theory. There are other approaches possible. For me the foundation of the rule of colonialism is mental slavery or the colonization of the mind.  It is a foundational concept in decolonial theory like “individual freedom” is for Liberalism and “class struggle” for Marxism. The struggle against mental slavery is the struggle for decolonizing the mind.

If you say – as the decolonial movement around the world is saying – that the current Westernized system is wrong, then you need to explain what is wrong, why it is wrong and how it is wrong. A decolonial theory cannot just propose concepts without explaining why these concepts are needed. Critique is the first component van DTM.

The second component is the building of alternative foundations of knowledge production. If there are fundamental flaws in key concepts of Eurocentric science, what then are the alternatives? Are there other forms of knowledge that enable us to getter a better understanding of the world and provide a more accurate description and analysis of social, economic, cultural and political processes and even a better understanding of nature? What would be the foundational concepts of the other systems of knowledge production? How do we arrive at these concepts? Before the rise of Western Enlightenment there was already scientific knowledge production outside the West. Four thousands of years intellectuals in Africa, Asia, Oceania and the Americas have produced knowledge about philosophy, economics, social relations, political processes, culture and nature. They have produced fundamental concepts and categories. Often they have been discarded as primitive, irrational and unscientific by Eurocentric scientists. But if these scientists themselves produce invalid knowledge, is that not an argument to take a fresh look at the basic scientific concepts that have been produced outside the West and evaluate their relevance in developing a decolonial framework for knowledge production? How do we combine old insights with new creative ideas to understand the world we are living in? So, creating the alternative foundations of decolonial science goes beyond the critique of Eurocentrism.

The third component of DTM is the translation of knowledge in action and policies. There has always been a strong connection between the dominant Eurocentric knowledge production and practical politics. Politicians and administrators often use knowledge produced by Eurocentric scientist to justify their policy. Key concepts in Eurocentric science find their way through the educational system and the media and shape the attitude of people in society. Their state of mind, their understanding of social, economic, political and cultural relations and processes and actual position towards the institutions of power are influenced by what they have learned and what they are learning from the authorities of knowledge production, the experts, scientists and opinion makers. A DTM critique of Eurocentric knowledge is also a critique of the policies and actions that are based on this knowledge. A critique of dominant policies and actions is not without consequences, because it is an act of resistance. Alternative knowledge leads to alternative attitudes, alternative actions and policies. DTM is not only an academic exercise in knowledge production that produces critique and alternative knowledge. It takes on the responsibility to translate this critique and knowledge in alternatives actions and policies.