On August 10th, the Minister of Science and Technology of Venezuela, Gabriela Jimenez, launched a national call for projects on reparations for the afrodescendent people of Venezuela. The lines of research were the collective product of a workshop held during the Second International Seminar on Reparations for Slavery and Colonization organized by the Simón Bolívar Institute for Peace and Solidarity Amongst the Peoples (ISB) and the Center for the Study of Social Transformations of the Venezuelan Institute of Scientific Research (CETS-IVIC). The lectures are on YouTube.

Sandew Hira, secretary of the DIN Foundation gave two lectures. This is his first lecture and this is the second one.

The call is only for people living in Venezuela.

The proposals submitted to this call should focus on one or some of the following lines of research: 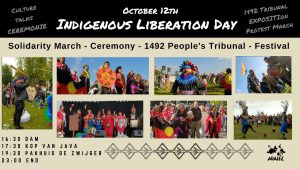 On October 12 Aralez in the Netherlands organize a day full of activities including; a solidarity march, Mapu commemoration and solidarity ceremony, a 1492 people’s tribunal, cultural performances and panels. Together we commemorate the day Columbus invaded Abya Yala (the American continent) in 1492. A date that marks the symbolic beginning of European colonialism. A process that has institutionalised genocide and ecocide worldwide. As a result, the right to self-determination, identity and culture of Indigenous People’s is still under pressure. Indigenous land defenders are displaced and killed; rivers and environment polluted; and land expropriated for the profit of large multinationals. The result is the current climate crisis. Therefore, it is time for reparatory justice and decolonisation! This festival offers a platform to critical perspectives on the climate crisis, healing, cultural values, and solidarity.
More information about speakers and program will follow soon.