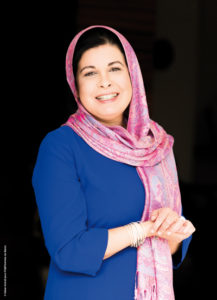 Asma Lamrabet is a liberation theologist from Morocco. She is lecturing at the Granada Summer School on Islamic Liberation Theology. DIN asked her about her background.
Asma: “I am a Doctor working as hematologist at a Public Hospital in Rabat, author of several books, and Director of the Center for Studies and Research on Women’s Issues in Islam (CERFI) affiliated to the Rabita almuhammadya of the Moroccan Ulema in Rabat Morocco. I was born and currently reside in Rabat. Since I was young, I have travelled around the world. I have lived in France, Lebanon and Algeria because of my Father’s political exile (he was a nationalist opposed to the regime of the former King Hassan II). Married to a diplomat in 1982, I lived in various countries in South America (between 1996 and 2003), where I used to do voluntary work in Public hospitals. I must say that it was there where I came into contact with the Theology of liberation, which motivated me to evaluate my own religion of Islam from a new perspective.
In my return to Morocco in 2003, I created a group of Muslim women working on intercultural dialogue. In 2008, I became president of the International Group of Studies and Reflection on Women and Islam (GIERFI) based in Barcelona.
In 2011, I was appointed as Director of the Center for Studies and Research on Women’s Issues in Islam, which is affiliated to an official religious institution. I am the author of various articles and books published in Arabic, French, English and Italian.”

In her lectures in Granada Asma deals with topics like the discourse on Muslim women’s veil (hijab) as a colonialist ideology and decolonial views from an Islamic perspective. She discusses Islamic feminism from a western feminism perspective and from a reformist vision within Islam. Recently Asma has written a book on 20 Questions and Answers on Islam and Women from a reformist vision in the series Decolonizing The Mind.
Asma: “I believe in a plural feminism. Western feminism can’t be limited to one movement. In its universal definition, it is a historical dynamic which believes that feminism is the product of a continuous struggle of women against patriarchal oppression. Therefore, feminism around the world is in fact a continuity of this struggle in the human history out of any historical or geographical context. The conceptual ideology of Feminism was born in the West (US and France essentially). Therefore, we have a hegemonic Feminism which has developed a restrictive definition that considers feminism to be necessarily representing all women because it is a political movement originated in the West. More than that, it believes that there is no Feminism out of this Western Feminism. In my point of view, this is a colonial and paternalist vision that wants to impose their norms on all women, and specifically women in the South who have been marginalized by this western hegemonic feminism.
So as a woman living in the South and in the Muslim world, I can share the universal principles of feminism which are dignity, liberty and no discrimination for all women. But I want and must have my own model because my sociocultural context is different. If the principles can be common, each feminism (or each context) has its own priority and model. Concepts such as colonization, racism or slavery, are all absent in the hegemonic feminist thought, and as south feminists or “marginalized” feminists, we must have our own experience that allows us to develop our own strategy of resistance and mobilization.
My work on Islamic vision on women is shared by many others Muslim Women around the world, who are struggling for women’s emancipation within Islam and through the re-appropriation of the process of interpretation of Islamic sources. It is also about a decolonial emancipatory project, developed in opposition to hegemonic structures inside power relations at social and religious levels. It is here where it can be defined as a “theology of liberation” within the Islamic thought. It aims to propose a new interpretation of the sacred texts based on a reformist approach in order to show the emancipatory character of the Islamic revelation.
I also describe my view as a “third way”, as an alternative to both: secular western feminism and religious conservatism. It is a third way which aims to make Islam and gender equality compatible and which has a humanistic and ethical approach. “

Learn more about Asma through her website: www.asma-lamrabet.com.
Her email: lamrabetasma2@gmail.com.