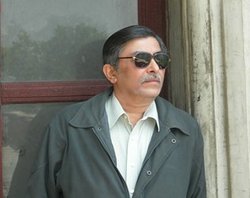 The Conversation is a website dedicated to “independent, high-quality, authenticated, explanatory journalism” established by a white Australian journalist named Andrew Jaspan. The website is heavily funded by institutions such as Carnegie Foundations. It started in Australia and then expanded to United states, United Kingdom, France and now recently Africa (which is a continent, the others are countries). The expansion to Africa is funded by the Bill Gates Foundation.

The Conversation prides itself in promoting “the free flow of information” and contributing “to healthy democratic discourse by injecting facts and evidence into the public arena.” The Conversion positions itself as an objective source of information.

In an article in the African edition, Karen Brodie from the University of Witwatersrand asserted that “much, though certainly not all, of mathematics was created by dead white men.” Decolonial mathematician C.K. Raju challenged this claim and wrote an article for The Conversation in which he provides a decolonial history of mathematics and an approach to decolonize mathematics. It was published in the Global Edition on 24 October 2016. It quickly reached a readership of 16,737. About 24% of the readers were from South Africa, and about 35% from US. But then it was taken down. Against the background of the call to decolonize the universities in South Africa the article became a rallying point in the discussion on decolonizing the hard sciences by challenging the authority of Western knowledge. Caroline Southey, the (white) editor of the African edition, took the article down with the argument that “that we did not follow normal procedures in editing your article. We require authors to reference others in the arguments that they make. In this instance you have sited only your own work to back up your key points.” (mail of Southey to Raju dd. 26 October 2016). No mention was made of any incorrect facts or flaws in the content of his arguments.

Raju responded as follows: “The reason privately given by Southey, is not given publicly because it is MANIFESTLY FALSE. This can be very easily checked. Simply examine the article, it cites Karen Brodie, it cites Clagett’s Egyptian source book for the Rhind papyrus, it cites the Principia of Whitehead and Russell, it cites the book on Decolonising the University by Claude Alvares and Shad Faruqi. Therefore, Southey either lacks academic rigor or just dishonestly twisted the facts in the reasons she gave in private. Further, one of the citations to some 22 clips archived from the Sun, Malaysia at http://ckraju.net/blog/?p=61. As can easily be checked, it involves a large amount of material written by others, and the link to the blog is just a compact way of referencing that material: a compactness essential for the format used by Conversation. It is absolutely false to call it a self citation. But Southey lacks the academic rigor to check facts, or is deliberately twisting them. Further, in the article there are citations of newspaper articles and interviews. A newspaper or magazine article which concerns me, is nevertheless work done by others. It is decidedly DISHONEST to call it a self-citation as Southey does (though only in private).”

There are two issues involved in this case.

Obviously the first one is the question of censorship of decolonial thinkers by so-called unbiased institutions. A similar case was the censorship of a decolonial course on Palestine by the University of California Berkeley. In both cases the decolonial narrative that challenges the authority of knowledge production was problematic for these institutions that presents themselves as objective but subsequently use or invent institutional procedures to attack freedom of expression. They refrain from discussing the content.

The second issue is how centres of knowledge production and dissemination outside the universities are playing an increasing role in influencing public opinion: think tanks, TED-talks, private research centres etc. They are heavily funded and have staff that is often white controlled at the top to ensure that the narratives stays within the limits of Western views. They have people of colour in minor position as window dressing.

Decolonial thinkers who use these platforms sooner or later will come up against the wall of silence: the (white) people in power will use their power to stop the expression of decolonial views. They cannot respond using knowledge, because in this field they are easily beaten, so they must use arguments about rules and regulations.

The short term response to these machinations is to uphold the value of freedom of expression and confront the institutions with their so-called adherence to this value. They have two choices.

The first is open up the wall again in order to prevent the protest from growing and possibly inspiring others to attack the institution and thus contribute to the downfall of their prestige.

The second is keep the wall closed and hope that the protest is not strong enough to bring them down.

We should keep banging on their door to show the contradiction between what they preach and what they do.

The long term response is that the decolonial movement should develop its own centres of knowledge production and dissemination. That is exactly what the Decolonial International Network is striving for. The funders of The Conversation has enabled them to build a staff of 90 people and an infrastructure to do the work. We are not there yet, but we should have the ambition to go there.