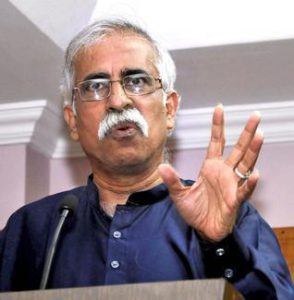 Claude Alvares: “Universities as we know them should not and shall not exist in the future. We need multiversities.”

Claude Alvares lives in Goa, India. Early 2000 he was meeting with Mohamed Idris, president of the Consumers Association of Penang in Malaysia (Penang). They had a discussion on several issues, among them the fact that university students are not interested in academic knowledge (the aim of higher education) but in getting a degree. How is it possible that the whole system of higher education has totally missed its objective and what should we do about it?

Claude: “Uncle Idris asked me: ‘Why don’t you write a note to answer this question’? I said: ‘OK, I will’ and that is how Multiversity got started.” In his note Claude wrote: “The processes of human history across this period have resulted in the creation of a grotesque and overpowering myth whose narratives simply assume the superior intellect quality and intellectual output of human beings from Western societies and of their institutions as well. Their ethical standards, when compared with what is available to the rest of the planet, are allegedly so advanced they obviously provide them with a certain righteousness with which to berate the rest.”

Uncle Idris took upon him the task to build a trust to finance the whole enterprise. In 2002 the first Multiversity conference was held in Penang. Since then seven conferences were organized. They have produced an amazing amount of work on decolonizing the university. Much of the material is freely available on the internet: www.multiversityindia.org.

Claude does not shy away from challenging the west in a fundamental way: “I argue for a new discipline in science: Europology, or Whitology or White Studies or something like that. The general idea is to conduct a reverse anthropology which would examine the West and its intellect products in a wholly clinical manner, just as a modern day pathologist would examine malignant tissue. For we are in fact dealing with a species of human beings that has become a cancer on the planet. The nature of the illness must be bluntly told so that in place of admiration one is left with compassion instead. Orientalism ought not to be substituted by occidentalism, since both are distorted positions on human beings. What we need is an elaborate histopathology that might see Western individuals at best as infected by the disease of “occidentosis”, a cultural variant of the plague.”

The Multiversity conferences did that. They examined how Western knowledge production was infected by the disease of “occidentosis” in all disciplines of science. Critical thinkers from all parts of the world and all civilizations took part in these conferences.

Claude: “We had extensive critiques of ‘occidentosis’. But we need to move beyond that and ask ourselves the question: ‘what is the alternative?’”

Universities have a fixed format: a building with lecture rooms, a library, a cafeteria and study halls; lecturers who come give lectures; students who pay a fee, listen to the lecturers and make assignments. The lecturers as the experts who transfer their knowledge. The students are the ignorant people who absorb the knowledge.

Claude: “This system miseducates young people. Even companies like Ernst and Young and Penguin now acknowledge that university degrees are obsolete and don’t deliver on their promise. So we need to creatively think about other structures of higher education. Maybe the class room could be outside in a field or under a tree. It might open your mind rather than close it. It operates on a different concept of knowledge production. Knowledge is not only with an expert who studied literature or conducted experiments in a laboratory. You grandmother might have relevant knowledge which you can use, but you never thought about her because she is not from the university. Knowledge is not only getting to know about something outside of you. It also a matter of become aware of what is inside you. If you creatively work on these concepts you might come up with other systems of higher education like the Swaraj University in India or the Marcus Garvey Pan Afrikan University in Uganda. Maybe we don’t need exams and tests. We can other ways to develop the talents of young people.”

Claude is working on the next project of Multiversity: a sourcebook that brings together 15 years of work on decolonizing higher education.

Claude: “From 2002 onwards we have collected data on institutions around the world that are working on reorienting higher education away from the western system. The sourcebook brings this material together and puts it in a theoretical framework.”

Multiversity is a major source of decolonial knowledge and a great network for decolonial theory and practice.

The next multiversity conference was scheduled to be organised in JNU, Delhi. However, that fell through after we found the university was too much an active component of an oppressive state. The next conference will be announced on our website.