I met Indian mathematician Chandra Kant Raju (1954) in 2015 in Malaysia at a conference of Multiversity. He is working on decolonizing mathematics and physics. He is a walking encyclopaedia, full of humour and sarcasm and can not stop talking once he starts. We have had quite a few conversations via Skype after our meeting in Malaysia. I always enjoy our chats. Sometimes I get lost in the technical stuff, but than he helps me find my way into the complex world of mathematics. 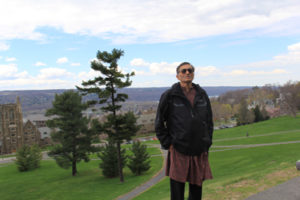 Raju explains what it means: “In school our children are being taught two conflicting systems of mathematics. In primary school they learn to calculate in an empirical way: one apple and one apple makes two apples. But later on they they are told that is wrong, and learn some formal mathematics where you postulate some axioms and use the deductive method to arrive at conclusions from the axioms. This makes matters very complicated: Whitehead and Bertrand Russell took 368 pages to deductively prove 1+1=2 in their book. Decolonised mathematics eliminates this needless complexity and accepts the natural and empirical way; it is simple and easy.”

Indeed, that is how I learned mathematics using deductive proofs. The famous example is: “All men are mortal. Socrates is a man. Therefore Socrates is mortal.” So what is wrong with that method of deduction? Why is this Eurocentric, apart from the fact that a male is used in this example?

Raju: “First of all, I don’t use the term ‘Eurocentric’ because it wrongly suggests that a massive piece of deliberate mischief was an innocent mistake. Second there is nothing wrong with the method of deduction as such, which was used also, for example, in India. Of course, attributing this syllogism to Aristotle is the usual false Western history: there is nil evidence to link the syllogism to Aristotle. What is uniquely Western and wrong are the claims that (a) deduction is infallible, (b) that it is universal (c) that deductive proof is superior to empirical proof, and that (d) it is possible to arrive at valid knowledge without any empirical inputs, as in formal mathematics. All these wrong claims lead to the wrong belief that Western (formal) mathematics is superior and the only right way to  do mathematics.”

He then moves on to elaborate: “Empirical proof is rejected by Western mathematics on the grounds that empirical proof is fallible. Our senses might mislead us. To use a classical example from Indian philosophy: I might mistake a rope for a snake or a snake for a rope. But deductive proof too is fallible: one may easily mistake an invalid deductive proof for a valid one. For example, the very first proposition of “Euclid’s” Elements has an invalid deductive proof. But for 8 centuries that book was mistakenly regarded by all the foremost minds in the West as the model of deductive proof, when, in fact, there isn’t a single valid deductive proof in it, as Bertrand Russell too emphasized. How do you know that his own 368 page proof of 1+1=2 is valid? You just blindly trust authority, and such blind trust can be very fallible. Empirical proofs are never so fallible: one might mistake a rope for a snake, but the Western error about “Euclid’s” Elements, is like mistaking a rope for an elephant.”

“No, on the contrary they are inferior. Divorced from the empirical, even a valid deductive proof does not lead to valid knowledge or even to approximately valid knowledge,” states Raju. “Using the deductive method any silly proposition whatsoever can be proved as a mathematical theorem from some postulates.”

Raju likes to poke fun at Western philosophers and mathematicians like Bertrand Russell (1872-1970). Raju: “I could easily give a valid deductive proof that Russell is a racist. I would start with ‘All western philosophers from the 17th to the 20th century were racist. Russell was a 20th century western philosopher. So Russell was a racist.’ This is a valid deductive proof. But is it valid knowledge? No, if it is detached from empirical evidence it is not valid knowledge. We need to examine whether the premises are empirically true. But we can never experimentally check the premises of formal mathematics, such as axioms of set theory, for they are pure metaphysics.”

Yet another problem with formal mathematics is that it is based on a particular logic: the two-valued logic, which Western philosophers such as Kant took to be god-given or a priori. In this logic a proposition is either true or false. But there are many other logical systems Kant was ignorant of. Raju: “Take the Buddhist catuskoti logic. This is based on four alternatives. For example: the world is finite; the world is infinite, the world is both finite (in one direction) and infinite (in another direction), and the world is neither finite nor infinite (there can be other ways to look at the world).  And Buddhist logic is just one of the many logical systems, there are others such as Jaina syadavada logic. In fact, one can conceive of an infinity of possible logics. This was not known to the West when formal mathematics developed in the early 20th c. Given the different systems of logic, one should select the right logic, on scientific grounds. But science inevitably involves empirical proofs. The resulting logic need not be two-valued (remember Schrodinger’s cat which is both dead and alive?) But, whatever that logic, if logic itself is decided on empirical grounds how can one claim that logical proofs are superior to empirical proofs?”

Does decolonised mathematics then use some other logic for proof?

Raju says: “First, decolonised math shifts the whole focus away from the wrong idea that math is about metaphysical proof and persuasion which were church requirements. Most people actually learn mathematics for its applications to everyday commerce, or to engineering and science.  Those applications accept empirical proof, and require approximate calculations not supposed infallibility. This needs my philosophy of zeroism, not formalism, though the West does not acknowledge the right of the non-West to develop a different philosophy of math.  Mathematics historically developed in the non-West for its practical applications. That non-Western mathematics such as arithmetic algorithms, algebra, probability and calculus was imported wholesale by the West from the non-West, for its practical applications to commerce, navigation etc., though that real history has been suppressed, with persistent false tales of Greeks like “Euclid” who never existed. Decolonised mathematics focuses on practical value; it eliminates the superficial  metaphysics that the West retrospectively added to imported practical math. Students find math difficult today just because of that useless Western metaphysics; eliminating it retains all  practical value, but makes decolonised math very easy. For example the calculus can be taught in 5 days as I have demonstrated. Because decolonised math is so easy students can do harder problems, not covered in current calculus courses. So, they become better at real math.”

What about applications to advanced science? Don’t they use formal math? Would they be affected?

Raju responds: “No, decolonised math works better also at the advanced level. I explained this in detail in my talk at the Massachusetts Institute Of Technology (MIT)  on ‘Calculus: the real story’ (see the video, presentation, or abstract). Basically, university calculus and also its advanced replacements fail for advanced applications to science. The original Indian calculus based on a “non-Archimedean” arithmetic still works. As another example, correcting Newton’s metaphysical errors about the calculus  leads to a better theory of gravitation, as I have shown. But this requires a reference to my technical books and papers.”

Raju can easily pull of hundreds of examples that show what is wrong with formal mathematics and why decolonial mathematics produces better math. He has published many articles on it, links to which can be found on his website: http://ckraju.net/.

Raju lives in Delhi. Do you want to invite Raju for a lecture, email him at: c_k_raju@hotmail.com.