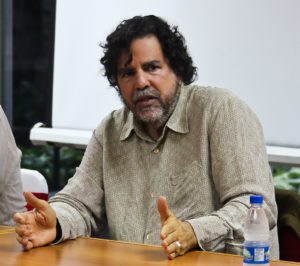 “Racism is a global hierarchy of superiority and inferiority along the line of the human that have been politically, culturally and economically produced and reproduced for centuries by the institutions of the ‘capitalist/patriarchal western-centric/Christian-centric modern/colonial world-system’,” argues Ramon Grosfoguel from the University of California Berkeley. He bases his analysis on Frantz Fanon: “The people classified above the line of the human are recognized socially in their humanity as human beings and, thus, enjoy access to rights (human rights, civil rights, women rights and/or labor rights), material resources, and social recognition to their subjectivities, identities, epistemologies and spiritualities. The people below the line of the human are considered subhuman or non-human; that is, their humanity is questioned and, as such, negated (Fanon 1967). In the latter case, the extension of rights, material resources and the recognition of their subjectivities, identities, spiritualities and epistemologies are denied.”

Grosfoguel developed his argument in this article and this video: