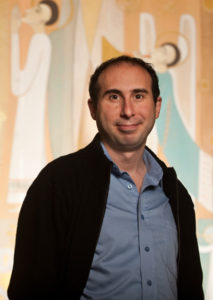 Santiago Slabodsky is a social theorist who teaches decolonial Jewish thought, Muslim-Jewish relations, and cross-cultural liberation theologies at the summer school in Granada. Trained in academic institutions and a rabbinical seminary, he currently holds the Florence and Robert Kaufman Endowed Chair in Jewish Studies in the School of Government, Public Policy and International Affairs at Hofstra University in New York. In addition he is Co-Director of the journal Decolonial Horizons housed in Latin America and published by Pluto Journals, Co-Chair of the Liberation Theologies unit at the American Academy of Religion, and author of Decolonial Judaism (2014), Living Traditions and Conviviality (2016) and the forthcoming Unequal Siblings. Santiago is going to contribute to the newsletter in the future on issues of decolonial liberation theologies. He shares his biography so we know from where he is speaking.

I was born in South America during the late 1970s when my homeland, Argentina, was submerged in one of the bloodiest military dictatorships that inundated the region. These regimes – often elaborated and sanctioned by American administrations – were particularly bloody for my community. In Argentina the de facto rulers and self-appointed defenders of “Western and Christian civilization,” “disappeared” 30.000 activists. This was a euphemism to hide the kidnapping, torture, rape, assassination and ultimate vanishing of the militants who struggled against the dictatorship’s political design. My community, surprisingly for some today, was largely over-represented among the “disappeared.” While Argentinean Jews were only 1% of the population, they accounted for 12% of the victims.

From a very early age, then, I bumped into one of my first geopolitical paradoxes. On the one hand, the most important ideologues and architects of this project was Henry Kissinger, a Jew who had fled the Holocaust and migrated to the US. Then, thanks to the gradual transformation of American Jews into white and Western citizens, he had dominated American foreign policy during the 1970s.  On the other hand, Latin American Jews, who had not gone through the same process, were largely overrepresented among the many victims of this Western design. They were seen as a threat against a geopolitical project that intended to keep the Cold War freezing in the North-Atlantic while criminally heating the rest of the world with unrestrained violence.

This tension contradicted key axioms of post-Holocaust Jewish life. The normativity could not survive spatial and ultimately racial differences. The narrative asserted that an aggressive Western (European or American) presence was the best preventive measure against a new Holocaust. But Western policies were the problem and not the solution. Yet, when we reflect on this narrative taking into account a broader framework it is not surprising. This was the very same civilization that justified expansion while colonizing Natives, enslaving Africans and perpetrating the first Holocaust.  We were also told that the State of Israel was born to guarantee the security of the Jews worldwide. Yet during the 1970s the Jewish state was more interested in developing commercial ties –including weaponry— with the dictatorship than in helping its victims, with Jews overrepresented among them. Again reading the situation in a broader perspective, this should not surprise us. This is the same national project that had displaced Palestinians, inferiorized non-Western Jews (Arabs, Africans) and finally ignored the fate of Argentinean Jews.

My intellectual commitment since then has been to question these normative axioms re-evaluating Jewish alliances around the world. I did so, first, by working in the Latin American slums with Liberation Theologians. I continued to do so by engaging with pro-Palestinian or social justice organizations in the so-called Middle East. Eventually, I began leading a Jewish congregation in Buenos Aires and developing an interfaith solidarity network in one of the harshest economic crises to hit my homeland. Upon moving to North America, I continued this work in the US and Canada joining struggles of organization against racism both home and internationally. And in the last decade, I have continued this commitment by participating in projects around the world to teach and learn from communities struggling against coloniality from South Africa to Macedonia, from Spain to Costa Rica and from the Netherlands to Argentina.

Central to my work is the historical revision of longstanding global designs and the narratives of ‘eternal hatred’ that split communities in struggle.  We are told, for example, that Muslims and Jews have been each other’s enemies since Biblical times. But this is a fairly new narrative. Until the 19th century while Jews were always seen as alien in the Christian world, they were an integral part of Muslim cultures. Furthermore, for centuries when the situation in Christian-ruled countries became unbearable, the first homes refugee Jews found were in Muslim majority lands. In the 19th century, however, the imperial thirst – for the Maghreb first and the Middle East later – made colonial powers implement a divide and conquer strategy, elevating Jews (among other minorities) over the majority of the Muslim population, and fostering the cleavage we know today. But it was not until the establishment of Israel (1948) and especially the Suez Crisis (1956), when the State allied itself with traditional imperial powers (the UK and France), that the split became permanent and globalized beyond the context. Even at the end of this period the leader of Morocco, Mohammed V, was asking for a “Jewish-Berber-Muslim” alliance against the French occupiers. My work explores, as one example, that hatred between Muslims and Jews was not eternal but a colonial construction. And a decolonial project will re-evaluate the relation among communities in struggle.

My intellectual commitment, then, is to unveil connections that have been hidden and denounce their utilization to reproduce colonial designs. For this reason I usually draw from Latin American and Caribbean schools of thought to explain that in 1492 a new world was inaugurated by the parallel constructions of  “the African,” “the Native,” “the Jew,” and “the Muslim.” In my book Decolonial Judaism, for example, I explain how the term barbarism has been used to create a network of enemies, and how these narratives simultaneously were used to create a rival that justified just wars and to encourage divisions among them.  My life-longtime project, then, is to create cross-cultural conversations among those who were deeply affected by coloniality. I am convinced we can learn from the internal committed critics of each tradition and explore togerher how the histories, strategies and creativities of each group can help to build, as the Zapatista movement once proclaimed, “a world where many worlds can fit.”