There are many contributions to decolonial theory, but they focus on specific themes notably epistemology, history, social relation (race, class, sexuality, gender), relation between humans and nature, politics etc. In my view we need to develop decolonial theory into a comprehensive, coherent and integral theoretical framework. A comprehensive framework means that decolonial theory should cover the major topics of how to analyze and change the world society. These topics are economic theory, social theory, political theory and cultural theory. A coherent manner means that different theoretical parts of the comprehensive framework should not contract each other. They should be consistent and logical. An integral manner means that the different parts should be connected through some basic common concepts that link them together to form a distinctive theoretical framework.

Liberalism was the theoretical framework of the rising capitalist class in Europe against the feudal Christian social order. It claim universality, but in reality it had an epistemology that removed ethics from knowledge production in order to fight the influence of the Church. Liberalism was comprehensive. It had an economic theory of capitalism, a social theory of the individual as the cornerstone of society, a political theory of parliamentary democracy and a cultural theory of universal scientific and objective knowledge production. It had a view of world history that states that human society moves from backwardness to modernity with liberal capitalism as its eternal apex.

Socialism was the theoretical framework of the revolutionary working class in capitalist society. Its epistemology acknowledge was not different of Liberalism. It has the same universalist approach to knowledge production. Its economic theory was based on the labour theory of value that explains how capitalist exploitation works by extract value from unpaid labour of the worker. It social theory was a class analysis of social relations. It political theory was the theory of organizing a socialist revolution to overthrow the capitalist system. Its cultural theory was based on the concept of an base (technological and economic fundaments of a society) that influences or even determines the superstructure of social, political and cultural relations.

Outside the Western Enlightenment there are multiple comprehensive, coherent and integral theoretical frameworks. In Islam, Buddhism and Chinese philosophy these frameworks have been articulated for societies in which they were dominant. There may be such frameworks that has been developed in current times, but in languages that are inaccessible for me. Therefore I want to emphasize that what I present here is just one of the many possible (decolonial) frameworks.

The core of the framework I present here is based on the concept of mental slavery and Decolonizing The MIND (DTM). It is a specific approach to decolonial theory. There are other approaches possible. For me the foundation of the rule of colonialism is mental slavery or the colonization of the mind.  It is a foundational concept in decolonial theory like “individual freedom” is for Liberalism and “class struggle” for Marxism. The struggle against mental slavery is the struggle for decolonizing the mind.

If you say – as the decolonial movement around the world is saying – that the current Westernized system is wrong, then you need to explain what is wrong, why it is wrong and how it is wrong. A decolonial theory cannot just propose concepts without explaining why these concepts are needed. Critique is the first component van DTM.

The second component is the building of alternative foundations of knowledge production. If there are fundamental flaws in key concepts of Eurocentric science, what then are the alternatives? Are there other forms of knowledge that enable us to getter a better understanding of the world and provide a more accurate description and analysis of social, economic, cultural and political processes and even a better understanding of nature? What would be the foundational concepts of the other systems of knowledge production? How do we arrive at these concepts? Before the rise of Western Enlightenment there was already scientific knowledge production outside the West. Four thousands of years intellectuals in Africa, Asia, Oceania and the Americas have produced knowledge about philosophy, economics, social relations, political processes, culture and nature. They have produced fundamental concepts and categories. Often they have been discarded as primitive, irrational and unscientific by Eurocentric scientists. But if these scientists themselves produce invalid knowledge, is that not an argument to take a fresh look at the basic scientific concepts that have been produced outside the West and evaluate their relevance in developing a decolonial framework for knowledge production? How do we combine old insights with new creative ideas to understand the world we are living in? So, creating the alternative foundations of decolonial science goes beyond the critique of Eurocentrism.

The third component of DTM is the translation of knowledge in action and policies. There has always been a strong connection between the dominant Eurocentric knowledge production and practical politics. Politicians and administrators often use knowledge produced by Eurocentric scientist to justify their policy. Key concepts in Eurocentric science find their way through the educational system and the media and shape the attitude of people in society. Their state of mind, their understanding of social, economic, political and cultural relations and processes and actual position towards the institutions of power are influenced by what they have learned and what they are learning from the authorities of knowledge production, the experts, scientists and opinion makers. A DTM critique of Eurocentric knowledge is also a critique of the policies and actions that are based on this knowledge. A critique of dominant policies and actions is not without consequences, because it is an act of resistance. Alternative knowledge leads to alternative attitudes, alternative actions and policies. DTM is not only an academic exercise in knowledge production that produces critique and alternative knowledge. It takes on the responsibility to translate this critique and knowledge in alternatives actions and policies.

On 11 and 12 December 2021, IHRC and DIN organize the Islamophobia conference of 2021 that will address the questions posed by Muslim participation in civic and political life in the so-called ‘West,’ including countries like the UK, the US, the European Union, Australia and Canada. See for the program: https://www.ihrc.org.uk/activities/events/31525-working-with-the-westernised-establishment-yes-no-maybe/.

The DIN Foundation has developed a policy for the future that will focus on the following topics:

The Decolonial History App (DHA) is one of the projects that follows from this policy. It will enable us to reach tens of thousands if not millions of people (especially young people) with an popular educational instrument: the decolonial history app.

The DHA is a free mobile app that will be available in Google playstore and Apple store. It will be known as the decolonial history app and will be a product of the DIN Foundation.

The key features of the app are:

The app is targeting the following groups:

Here is a beta version of the app.

DIN wants to get researchers across the world involved in filling the app. Anyone who is interested in the app can start a conversation with DIN. Send an email to info@din.today and DIN will make an appointment for the conversation.

There is a new source of information about the Cuban revolution we should be all aware off: https://www.bellyofthebeastcuba.com/. Their website states: “The media landscape in Cuba is bleak. State-run outlets churn out propaganda while US-based journalism reinforces narratives propagated in Miami and DC. Some foreign media organizations try to find an “unbiased” happy medium, but the result is often false balance that obscures the context necessary to understand a country where every aspect of life is shaped by six decades of economic war waged by the world’s most powerful government.”

Their aim: “Through hard-hitting journalism and stunning cinematography we inform and inspire, opening eyes and hearts to a country with a unique past and a wide-open future.”

Watch their videos on the War on Cuba: 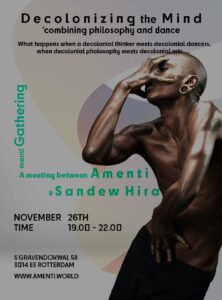 Decolonizing The Mind is a philosophy of liberation. Decolonial arts transforms entertainment in education and empowerment. Sandew Hira, secretary of the DIN Foundation combines a lecture on decolonial theory with dances performances of the Amenti Theatre Company in a lecture/dance combination.

This lecture/dance is an experiment in the combination of philosophy and art. Is it possible for dancers to teach decolonial philosophy with movement and expression from the body? It is possible for a decolonial thinker to have a conversation with dancers in their respective languages?

Amenti Theatre Company and Sandew Hira will engage in a unique artistic experiment that might open the door in the future for merging art with philosophy. 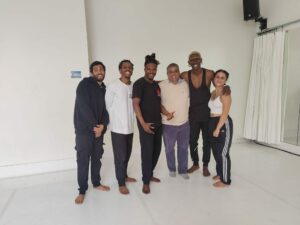 How can art contribute to decolonizing the mind? Immersing the spectator with feelings, rather than intellectual words. A way to empathize and create a connection. Amenti invites Sandew Hira this evening. Sandew Hira, penname for Dew Baboeram, is a historian and writer who published 20 books. Currently, he is writing a book about decolonizing the mind.

During this evening we will go into a conversation with Sandew, through words and dance. We invite you to attend this evening to learn but also discuss topics related to the decolonizing of the mind. During our ‘conversation’ there is room for questions and remarks. We would like to make this evening interactive, knowledgeable and magical.

Venezuelan diplomat Alex Saab was illegally arrested in Cape Verde on 12 June 2020 and illegally deported to the United States of America on 16 October 2021. Thus, his illegal arrest – or kidnapping – in Cape Verde lasted 471 days.
Read the fact sheet about this latest US attempt against the Bolivarian Revolution.

DIN has reported about the case of Sheikh Ibraheem Yaqoub El-Zakzaky and his wife Maillimah Zeenah who were arrested in 2015 after the Nigerian army massacred almost 400 Muslims in Zaria, Kaduna State. On July 28, 2021, Justice Gideon Kurada of the Kaduna State High Court discharged and acquitted them of culpable homicide, and unlawful assembly, among other criminal charges for which they have been standing trial. In his first interview with Press TV he goes into this ordeal. See the interview here: https://twitter.com/i/broadcasts/1mnxedyVoLAJX?s=08.

Activists from different parts of the world have lanched a manifest on the 20th anniversay of 9/11. See the text here: https://blogs.mediapart.fr/manifeste-20-ans-apres-le-11-septembre/blog/110921/we-must-choose-permanent-war-or-revolutionary-peace.

When we remember 9/11 it is good to remember not only the second one, but also the first one: 9/11 in Chili: https://www.republicworld.com/world-news/rest-of-the-world-news/1973-chile-coup-the-first-9-11-attack-allegedly-backed-by-the-usa.html

Ramon Grosfoguel and Sandew Hira present a decolonial analysis of the fall of Kabul and the take over of Afghanistan. See https://www.youtube.com/watch?v=5fu-1rtbLZU

Ibraheem Yaqoub El-Zakzaky and his wife Maillimah Zeenah were arrested in 2015 after the Nigerian army massacred almost 400 Muslims in Zaria, Kaduna State. Sheikh al-Zakzaky, a leader of the Islamic Movement in Nigeria, was injured and arrested along with his wife. The couple have nine children; six of them were murdered by the state. They were kept in state detention since 2015.

On 2 December 2016, they were ordered to be released from Department of State Services detention into police custody within 45 days. The judge announced that the justification of “holding him for his own protection” is not sufficient. He also ordered the state to pay $164,052 in compensation. The state refused to let them go.

In 2019, a court in Kaduna state granted him and his wife bail to seek treatment abroad but they returned from India after 3 days because of unfair treatment and restrictions by security services. Finally on July 28, 2021, Justice Gideon Kurada of the Kaduna State High Court discharged and acquitted them of culpable homicide, and unlawful assembly, among other criminal charges for which they have been standing trial since December 2018.

The Islamic Human Rights Commission (IHRC), a founding member of the Decolonial International Network Foundation, has been in de forefront of the campaign to free Zakzaky and Zeenah. Follow the campaign here.