On November 2d 1917, Arthur Balfour (1848–1930)—former Prime Minister of Britain and Secretary of State for Foreign Affairs—wrote a Letter to Lionel Walter Rotschild in order to explain his sympathy with the Jewish Zionist project: “His Majesty’s Government view with favour the establishment in Palestine of a national home for the Jewish people, and will use their best endeavours to facilitate the achievement of this object.”

This promise toward the Zionist movement became way more concrete with another project: the San Remo Conference (in 1920) that made Palestine part of the British Empire. Nevertheless, the Balfour-Declaration of 1917 not only was a sort of “first step” toward the creation of the Zionist State in 1948. It was also part of a wider treason of European’s power towards Arab nationalists. Indeed, one year earlier, in 1916, the Sykes-Picot Agreement between the UK and France defined several “sphere of influences” in order to control a whole part of the Ottoman Empire after its defeat during World War I. Hence, Balfour’s sympathy toward the establishment of a national home for Jewish people in Palestine paved the way for the Zionist colonial project. And indeed, one year later, there was a parade in Jerusalem by some Zionist groups in order to celebrate the first anniversary of this declaration.

No wonder that 100 years later Zionists still want to use this anniversary in order to legitimize the colonial system that Israel is. This is why, in several countries, anticolonial activists are organizing events in order to remember this declaration in another way: through the racist and colonial project it represents and how it fits perfectly with European colonialism. Hence, some anticolonial voices have responded to the call of Palestinians in order to denounce the celebration of the Balfour-Declaration by the Zionists and their accomplices. This is why we call all the Friends of Palestine to meet in the Parisian region on November 5 in order to commemorate rather than to celebrate the centenary of this declaration. Indeed, on November 5, at the Bourse du travail from Saint-Denis, the voices of the resistance toward colonialism will be heard through 4 speakers:

This event is a very important one since France is probably one of the most loyal accomplice of Zionist colonialism. During the 75th commemoration of the raid of the Vel d’Hiv in Paris, French President Emmanuel Macron invited Israeli Prime Minister Benyamin Netanyahou and declared that Antizionism is the “reinvented form of Antisemitism”. This fallacious attempt to delegitimize any antizionist effort is not very new. The consequences of this logic, that has shaped the French policy toward Israel for several years, had an devastating impact on the anticolonial movement with the criminalization of the BDS Movement. This political context poses with increasing urgency the necessity of continuing to resist despite the attempt to silence anticolonial voices in France.

The meeting of November 5th is organized by decolonial organizations and Immigrant organizations — like the Parti des Indigènes de la République, the Association des Travailleurs Maghrébins de France, the Fédération des Tunisiens pour une citoyenneté des deux rives – and some organizations from the French radical Left, like NPA, Ensemble, Attac. Hence, this common work has permitted us to organize, on a national scale, against the racist and colonial celebrations of the Balfour-Declarations that want to erase any anticolonial voice from the French political Landscape. But the organization of such an event in France is just a part of a more global organization of antizionist forces who are trying to show their support to the Palestinian people. The anticolonial bloc that has resulted from this anti-Balfour project will continue to support Palestine after November 5th. This meeting is part of a broader attempt to organize against colonialism and racism on an international level with every single force that shares our aim to raise our voices against the racist and colonial system that underlies the Zionist project since more than 100 years.

IHRC has complied the following sources on the Balfour Declaration.

Furthermore, there are two new books that are interesting for decolonial thinking.

ON THE SOCIOLOGY OF ISLAM: http://shop.ihrc.org/on-the-sociology-of-islam-ali-shariati-3 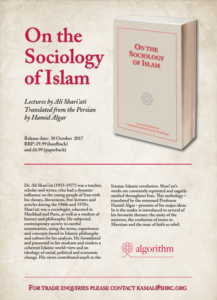 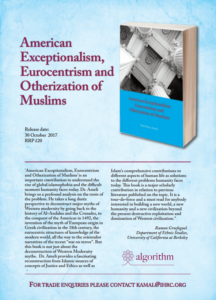